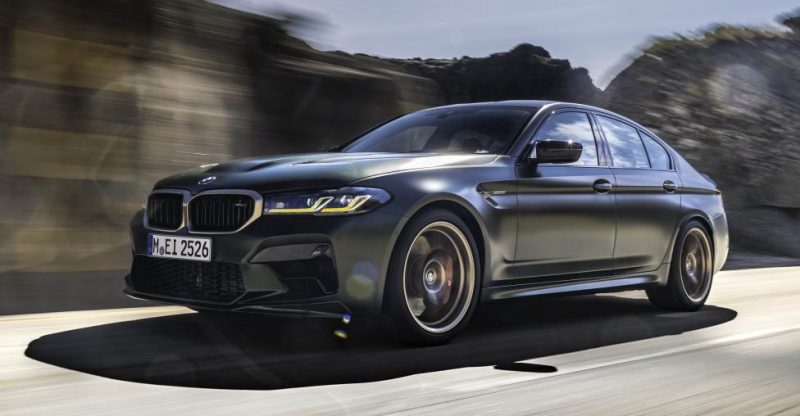 The new BMW M5 CS is basically the older BMW M5 Competition on steroids, it is more powerful and also looks more aggressive, and overall outperforms a lot of its competitors with ease.

The hood on the BMW M5 CS is one of the elements that have changed from the older BMW M5 Competition, and it’s made out of carbon fiber entirely on this model and the front kidney grille has a faded golden trim. The headlights on this beast feature the BMW top-of-the-range Laser Lights and the daytime running lights have a distinct color different from the other models, lighting up in a yellow hue, probably to match up the trim around the grille.

The front bumper also gets a carbon fiber front splitter, carbon fiber door mirrors, and different inserts in the front air intakes. The color of the trim on the front grille follows along with the 20-inch alloy rims that look absolutely insane on this model. It’s also 7mm lower to the ground than the conventional M5 Competition, in fact helping with the lower center of gravity, making it more stable on the road.

On the back of the car, you will find a pair of blacked-out taillights and a different spoiler than its older brother, a carbon fiber one followed by a carbon fiber rear diffuser and quad exhaust pipes, two on each side.

The engine under the hood of this monster is a 4.4-liter V8 twin-turbo 635 horsepower and 750 Nm of torque, it also drives all four wheels via the same 8-speed automatic torque converter gearbox found on the M5 Competition.

Another thing BMW’s done to this car reduces the weight so just like a normal M5 Competition you’ve got a carbon-fiber roof. In addition to the carbon roof, you’d also get the other carbon bits that help reduce the weight then as a fact the car’s wheels are forged, so they’re lighter than the carbon ones, the breaks are lighter than normal brakes, and overall save over 20 kilos in total.

They’ve done things like removing some sound deadening and seats are different and all that kind of things, overall the total weight saving is 70 kg which means that this M5 CS comes in at 1825 kilos which is pretty impressive for such a big car in fact it’s just 95 kilos heavier than the smaller M3. Overall every little piece of this puzzle helps, in the end, the result is the most powerful BMW M Car ever produced.