The automotive tuner SPORTEC from the Bavarian town of Weßling near Munich is now living up to its name with BMW models. Just in time for the turn of the year, a first example of the sporty BMW X6 40d was brought to SPORTEC to work on both the handling and the performance values.

To bring the BMW X6 a little closer to its M-brother, the team at SPORTEC gave the Bavarian a well-rounded performance package. From the factory, the BMW X6 40d comes with a twin-turbocharged 3.0-liter turbodiesel, which is equipped with 306 horsepower and 600 Newton meters. The sprint time from standstill to 100 km/h of 6.5 seconds is in the thoroughly sporty range for the design, but this should not be the end of the line for SPORTEC. Thanks to improved intake air ducting and an adjustment to the engine management system, the Bavarians were able to coax a further 64 hp and 150 Newton meters of torque out of the BMW X6. The result is quite impressive: Whereas it previously took 6.5 seconds for the cavalier sprint, the BMW X6 40d now reaches the 100 km/h mark in just 5.4 seconds thanks to SPORTEC, and the top speed also changes from the former 236 to 263 km/h.

Adequate to the new performance tuning of the in-line six-cylinder including a V-max boost (2,800 euros), SPORTEC also discreetly tackled the transmission. The 8-speed Steptronic automatic installed in the BMW X6 40d now operates with slightly shorter shift times to maintain the sporty interplay between the R6 engine and transmission. As a result, the smooth acceleration of the SAV remains as brisk but continuous as usual, while the individual gears of the 8-speed automatic are happy to work a bit more elastically for the snappy sprint. Incidentally, the engine update from SPORTEC is a viable alternative to the considerably more expensive BMW X6 M50d, which has 381 hp and 740 Nm.

What is still missing from most diesels in the higher price segment is a usable exhaust system with (at least for once) a decent improvement in the sound. Here, too, the SPORTEC team has started with the BMW X6: The now 370-horsepower semi-offroader was consequently given a new sports exhaust system from Akrapovic (2,800 euros) including particularly sporty carbon tailpipes (380 euros). They not only form the crowning glory of the high-quality Akrapovic system but also perfectly round off the rear end of the BMW X6 40d. The rear of the SAV also looks far beefier than the standard version thanks to the additional tailgate trim (450 euros). And work has also been done on the front of the BMW X6 40d, where front flaps (450 euros) are used for a likewise crisper look.

Away from performance and looks, SPORTEC has also devoted attention to the handling of the BMW X6 40d. The minor but nevertheless effective modifications make the 2-ton flagship a little more dynamic in the bends and literally make it easier to move. The standard wheel/tire combination had to give way in favor of new lighter 20-inch OZ rims (set: 2,300 euros) and conventional tires, saving between 9 and 10 kilograms of unsprung mass per wheel. The swap also optimizes the BMW X6 40d’s ride comfort in conjunction with the Adaptive Drive function, resulting in more dynamic handling of the SAV overall. 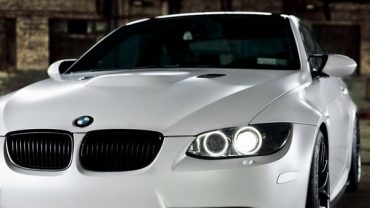