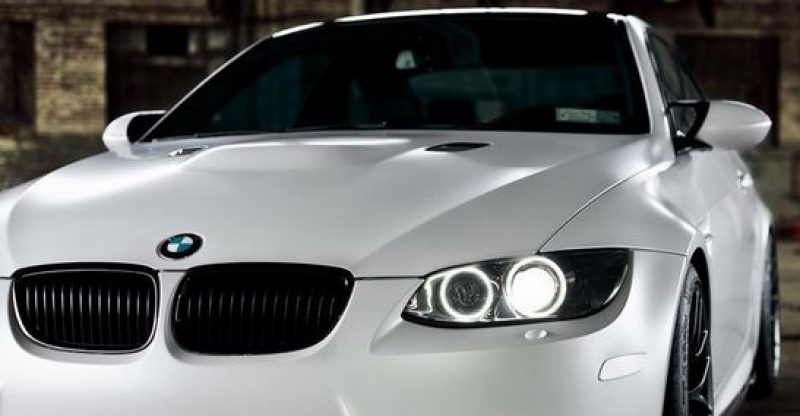 When they first spoke to their client, he told them he wanted to do something different to his car and needed their help to decide what he wanted to do. First, the BMW M3 was fitted with M Performance Parts, which included the mirror caps, front splitter, and rear spoiler.

Original BMW parts are a great thing, but in our case, they didn’t fit. The BMW M3 coupe comes standard with a carbon-fiber roof, so the carbon fiber M Performance accessories should have been a perfect fit, but unfortunately, BMW didn’t think of that. The roof has a 1×1 weave, while all of the M Performance accessories have a 2×2 weave. In most cases, you won’t notice this, but on a BMW M3 everything should fit perfectly.

This M3 was not only one of the last of its kind, but also one of 150 “Frozen Edition” M3s built for the American market. Our task was to make clear and unique modifications to emphasize the exclusivity of this vehicle. Together with the customer, they found the perfect elements to preserve the elegance and original shape of the car, while giving it a unique touch with an aggressive look.

Instead of simply installing aftermarket parts, they decided to give the car an accent color. After careful consideration, they decided on Pantone Process Blue, which comes from the BMW Motorsport logo. The tuner chose this color because you don’t see it that often and because it is a unique color, just like the Frozen White color.

To match the 1×1 carbon-fiber roof, ONEighty removed all M Performance accessories and opted for high-end parts. The tuner turned to Gintani and chose the 1×1 CF Weave Aero Kit, which includes the front spoiler, side skirts, rear fenders, and rear diffuser. The parts fit right in and they couldn’t think of a better fit for an aftermarket part. While the aero kit was being fabricated, they started working on the headlights.

Since he specializes in this area, the tuner wanted to address the OEM+ issue with something very simple, yet unique. The tuner added a carbon fiber 1×1 housing with a gloss finish, LED angel eyes, a smoked turn signal reflector, a clear lens for the turn signal, and replaced the original low beam lens with a clear lens for a cleaner look and better functionality. The next step was to lower the car for a more aggressive ride, but also to provide a smooth ride on New York streets. ONEighty chose H&R springs, which they use on their cars and frequently install for our customers, so they were familiar with the ride quality.

When it came to the accent color, the tuner was originally going to paint just the mirror caps and brakes, but he decided that would be too much, so he painted the inside of the mirrors, which he doesn’t do very often. The fender linings were painted because the process blue goes well with the frosty white, and of course, the Brembo brake system, which needs no further explanation. The car is still fairly new with less than 1,000 miles on the clock, so the tuner didn’t want to make any performance changes yet, but they wanted the M3 to make its presence felt on the road. The vehicle got fitted with a Borla exhaust system, which sounds great and keeps the noise in the car to a minimum. 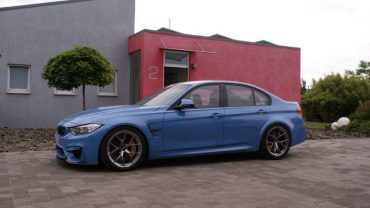